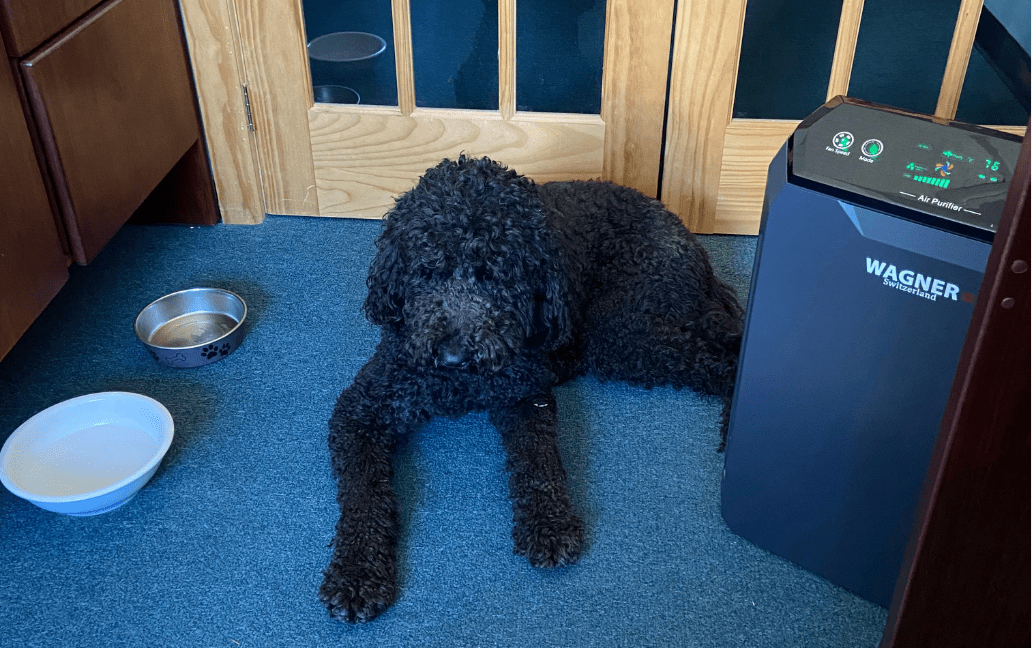 Today I brought my dog, Gracie, (pictured above) down to my office in Lakewood to get some ministry and legal work done. It is a quiet space where I can concentrate well.

She was a hit with office passersby even though I’m in the most secluded place in the building now with few people in my area. I was “demoted” from my huge multi-window office with people all around on the second floor to a “closet” sized office on the first floor with few people near me shortly after starting this ministry at Aspen Ridge Church. I must confess it initially hurt my pride to go from one of the largest offices in the building to the absolute smallest. However, I soon realized it was God’s will and happening to glorify him somehow. The new closet office became a great blessing over the years for many reasons including being able to strike up conversations with people on the first floor I didn’t often see on the second while finding ways to talk to them about God. Today was one such day.

Gracie’s first fan of this morning said “I love dogs! Can I pet her?” “Sure” I said. Gracie loved the attention as her tail waggly attested. As he laid on the affection and asked questions about her, I told my co-worker a true story, something similar to this:

Before Gracie, we had a 15-pound Jack Russell Terroir dog named Hunter. He had “little man’s complex.” He’d often go after big dogs like Rottweilers and German Shepards. And they would almost always run from him even though he could have been a 2 second snack. He was so crazy we called him the Jack Russel Terrorist. His craziness aside, he was a fun and super intelligent dog who was fabulous with our kids who were very young during his last years.

After he passed away, we waited almost 2 years before getting another dog. We needed time to recover! As we decided on a dog, we made a list of names we liked and debated them as a family. At one point, I said “After Hunter, we need a lot of God’s grace with our new dog.” I was only half joking.  Soon the name Gracie quickly rose to the top of our list and became the only one the entire family liked.

We knew we really needed God’s favor and grace with our new dog, so the name was a natural. So, that is the story of how we arrived at the name, Gracie!

My friend and co-worker laughed at the end of the story and said “That’s great!” He is a fellow believer and knows a thing or two about Grace, or, unmerited favor. You know, getting what we don’t deserve from the God of the Bible.  For those who have made Jesus the leader of their life, grace means getting unconditional love, absolute forgiveness and eternal life with God.

Gracie had five visitors today, more than the usual traffic around here, who were all excited to see and pet a dog in that part of the office. The visitors included an atheist, an agnostic, a former churchgoer who has fallen away from the faith, and a former Pastor turned legal investigator friend of mine who has a different theological bent than me.

I shared the same story above with each of them. It was a fun way to talk about God and evangelize a bit as they happily pet and praised my dog. As you can imagine, their reactions to the story varied widely with only the former Pastor and my believer friend seeing the nuanced humor in it. But it didn’t matter to me how they reacted. I had the opportunity to talk about God’s grace all in the context of a story about dogs. It was all in a light and fun conversation. Happy babies and friendly dogs seem to lighten even the hardest of hearts, don’t they?

The events got me thinking about evangelism. We often think of it as a very serious or stressful thing to talk about God. And sometimes it is. Sometimes it even should be. But it can also be fun, cute, soft and furry!

I believe we can talk winsomely about Jesus or tell a humorous story for even more impact. Especially to those who don’t see the fun and playfulness of Jesus. If you haven’t already, try it out with your neighbor or friend.

Talking about God in a relaxed and relatable way is fun. It doesn’t even have to be planned. Today certainly wasn’t for me. It just kind of happened. Just be ready when the opportunity strikes (1 Peter 3:15).

Maybe you can tell a co-worker about a God-sighting related to one of their interests. You could invite a neighbor to one of our fun small groups like frisbee golf or skiing and mention God’s beautiful creation as you enjoy recreation (or re-creation!) together. Or perhaps you even have an interesting story involving God and a dog. Today convinced me that talking about God like the bumper sticker says is way more interesting: “Bark less, wag more.”